skip to main | skip to sidebar

An eight-day strike by bus drivers in Bradford has been called off after they reached an agreement with their employer.
In April, 380 bus drivers walked out for 48 hours in a dispute with First in Bradford over job losses. Unite had warned of a further eight day strike if crunch talks with the company failed this week.
But yesterday, members based at the Bowling Back Lane depot voted 215 to 38 to accept a new agreement, which was drawn-up after two days of talks earlier this week. Mohammed Taj, the branch secretary for Unite in Bradford, said: "We've worked together to reach an agreement that has been strongly accepted by our members.
It was agreed after the talks that depot members would be given full consultation over any future potential job losses at the Bradford site.
Union members were also given reassurances by First over its commitment to the city after the company announced it would invest £2 million to bring 12 low emissions buses to Bradford from next month. The promise followed union criticism about the level of investment in the company's fleet.
http://www.thetelegraphandargus.co.uk
Posted by Busworker at 11:55 No comments: Links to this post 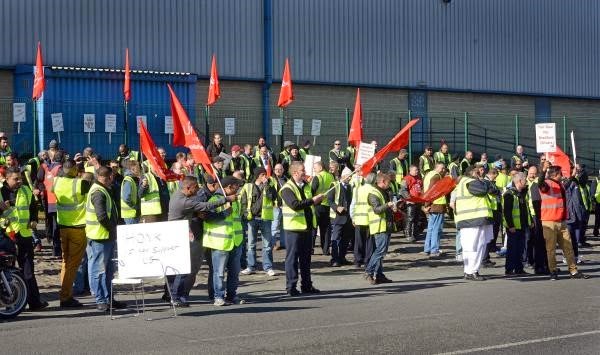 380 bus drivers are on strike in Bradford today. The 48-hour walkout started at 1.30am after crunch talks broke down on Saturday.
Unite union members says the primary reason for the action is the transfer of part of the 576 bus service from Bradford to Halifax which it says has cost eight jobs. But First deny this allegation.
Mohammed Taj, Unite branch secretary, said more than 200 people had joined the picket lane at the First Bradford depot in Bowling Back Lane today, including Bradford West parliamentary candidate George Galloway.
"It is going well," said Mr Taj. "As far as we are concerned we are absolutely rock solid… There is a lot of support, lots of people are backing us. People are pipping their horns."
A spokesman for First said the company was running skeleton service of 15 buses in Bradford, covering main routes. He said the strike was causing "massive disruption", and added: "We would like to bring the dispute to a close as quickly as possible."
http://www.thetelegraphandargus.co.uk
Posted by Busworker at 11:09 No comments: Links to this post

Drivers at First Bradford are due to walk out for 48-hours next week in a row over service cuts.
The dispute centres on the transfer to the Halifax depot of part of the 576 bus service from Bradford to Halifax, with the claimed loss of eight jobs. The 380 bus drivers at the First Bradford depot, members of Unite, plan to strike all day on Monday and Tuesday. The drivers voted by 89 per cent for strike action and by 93 per cent for industrial action short of a strike.

Running down
Unite had accused the company of running the bus depot down with the intention of closing it in the future. The union also claimed there was “bullying and harassment on a daily basis”.
Unite regional officer Harriet Eisner said: “This blinkered management has let services wither on the vine over the last four years – for example, the number of drivers employed has shrunk from 470 to 380 in that time... There is a big shortage of drivers with no recruitment of new drivers and this is coupled with the movement of jobs without consultation from Bradford to other towns.”
http://www.halifaxcourier.co.uk

Talks at ACAS between the union and the operator are due to begin tomorrow.
Posted by Busworker at 12:18 No comments: Links to this post

Yesterday drivers at Oxford Bus Company had planned to strike over pay, but it was called off after a revised offer. Workers were demanding a four per cent pay rise but the operator was only offering three per cent.
http://www.oxfordmail.co.uk

Posted by Busworker at 10:42 No comments: Links to this post

By Roger and Sarah Cox
Abdul arrived in Britain on a stretcher, a starved four stone wreck after the defeat of the Sudanese Communist Party in the 1970s. He had been a student organiser for the party and was part of a student uprising that was crushed. He was tortured by the police.

Harrow
Abdul was a man of considerable audacity, skill and experience. He became a bus driver in Harrow and it was not long before he won the position of Unite union rep. Very quickly he organised the branch, involving the other drivers. He understood the importance of fighting and winning on seemingly minor issues like facilities for prayers and meal breaks, as well as major issues like wage equality. Abdul stood out among bus reps as a fighter, always wanting to have a go, even if sometimes it might not be the best thing to do.

Socialist
He joined the Socialist Workers Party he said, because the comrade standing outside his garage week after week selling Socialist Worker and giving out leaflets reminded him of himself in his youth. When Nazis tried to protest in Harrow he mobilised bus workers to join the anti-fascist demonstration in their uniforms. It was a great example of how to organise joint action. Before long he faced opposition from management and he was victimised.

Tribunal
The process of industrial tribunal hearings and securing support from Unite exhausted him and took their toll. Abdul suffered a heart attack followed by the loss of kidney function and suffered increasing ill health until last week when he passed away.

Passion
He studied engineering and during his illness returned to another passion. He designed and tried to create an interest in his schemes for harnessing tidal power. This is what was so important about Abdul—to the end he was always a fighter, not just for better conditions in the daily grind of our working lives, but also to build a better world for us all.
http://socialistworker.co.uk
Posted by Busworker at 11:50 No comments: Links to this post

Bus drivers in London could be striking again soon if talks fail between Transport for London (TfL), bus operators and Unite. The talks are set for Thursday of this week.
Drivers at the capital’s 18 bus operators struck twice earlier this year demanding an end to unequal pay and sector wide negotiations. After months of the employers refusing to talk action by the drivers and pressure from their union has at least forced the bosses and TfL to sit round the table.
If nothing progresses from the talks more strikes will need to be called to rebuild the momentum lost since the last strike in February.
http://socialistworker.co.uk
Posted by Busworker at 11:32 No comments: Links to this post

Bus drivers at First in Sheffield, Rotherham and Doncaster are balloting for strikes over pay. The workers rejected bosses’ offer of a pay freeze this year
http://socialistworker.co.uk
Posted by Busworker at 22:47 No comments: Links to this post

Unite union members at five Abellio bus depots in London are set to ballot for strikes after bosses reneged on the second year of two-year pay deal. Drivers at Battersea, Beddington, Hayes, Twickenham and Walworth depots voted by 528 to 12 for strikes in a recent consultative ballot. Meanwhile at Metroline bosses are attempting to force through new contracts and at Tower Transit workers are resisting attacks on the union.
http://socialistworker.co.uk
Posted by Busworker at 22:43 No comments: Links to this post

Busworker
Busworker is a resource for trade union activists who work on the buses in Britain. If you are part of the fightback, then Busworker is for you. We want it to be a place for discussion and debates. We are all agreed on making the campaigns across the country as effective as possible, defending and extending democracy in the unions, fighting racism and the BNP and offering solidarity to other workers who are fighting back. Busworker is not in opposition to the official unions, but it does offer another place for activists to speak to each other. We will support every positive move by the unions, but also offer our own ideas on the way forward. We hope you enjoy this site and will send your reports, ideas and photos to busworker@gmail.com